Lisbon, embraced by the Tejo River, is the country's capital and is considered one of the main European economic centers. 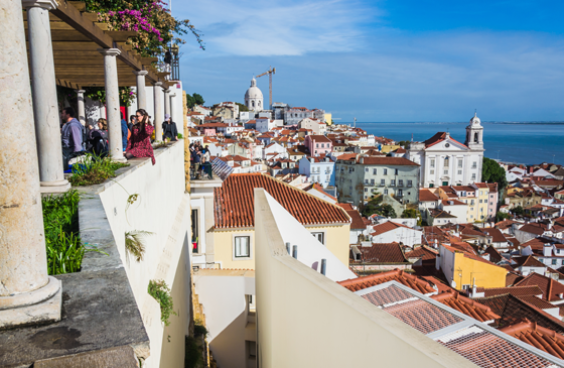 In its heart is the Baixa Pombalina, rebuilt after the 1755 earthquake, a space in which the emblematic Praça do Comércio stands. It's impossible not to fall in love with the city when visiting the viewpoints and old neighborhoods that are spread over its seven hills, where the most traditional restaurants, bars and shops are found. From Cais do Sodré to Parque das Nações one travels between the old and the modern, with characteristics that make Lisbon a unique city.

Rua Augusta takes us from Praça do Rossio to Praça do Comércio, filled with shops of various international brands and traditional restaurants. Praça do Comércio, rebuilt in the Pombaline style, is characterized by the wide arches that embrace it, welcoming in its center the statue of D. José I.

On the highest hill in the historic center, the Castle of São Jorge owes its construction to D. João I. Patron of knights and crusades, São Jorge gives the name to this Castle, which represents one of the last strongholds of defense for the elites. In this place it is possible to have one of the best views over the city of the seven hills.

Go down to Alfama, the oldest and most typical neighborhood in Lisbon and also the safest in the city. Enjoy the view from the Portas do Sol and Santa Luzia viewpoints, where Alfama is best seen. This neighborhood surrounds the Lisbon Cathedral, the São Jorge Castle, the Palace and the São Vicente Church.

The Jerónimos Monastery, declared a National Monument in 1907 and classified as World Heritage by UNESCO in 1983, is one of the most iconic monuments in Lisbon. Inside, kings and poets will have already been buried, making it a monument admired by all and considered a remarkable architectural example of Portuguese culture and identity.

Another museum that is mandatory to visit is the National Coach Museum. It is one of the best known and most visited museums in Lisbon, it had a collection of 29 vehicles, uniforms and accessories used by the Royal Family. These carriages tell us the most captivating and exciting stories and trips. Since 1910 this collection has been increasing with coaches that belonged to the Crown, the Patriarchate and some Aristocratic Houses and is nowadays considered unique in the world, including vehicles from the 17th to the 19th centuries.

All places described in our tour have been previously evaluated, ensuring us of their accessibility conditions.